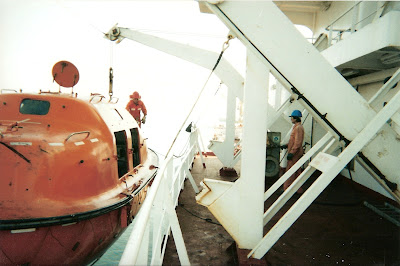 Preparing to lower the lifeboat. 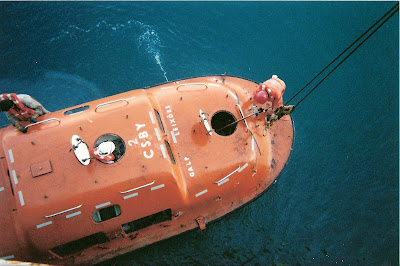 Lifeboat on the water, 2nd Officer in charge. 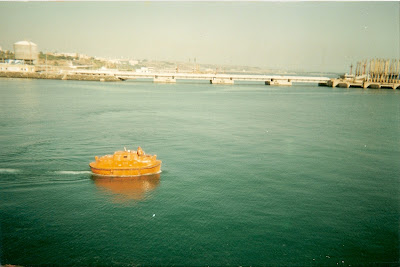 Is that the new Portuguese sub? No that´s just a full speed steaming lifeboat... 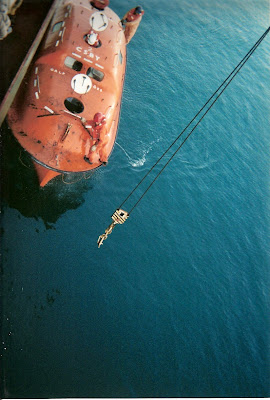 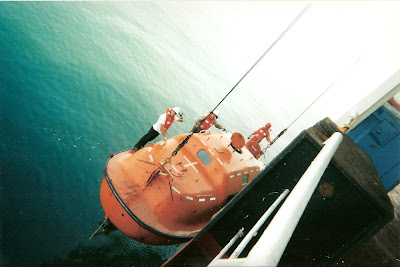 Hooks on place, start heaving up! 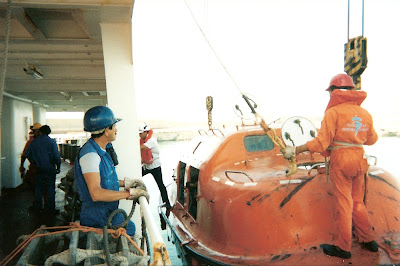 Lifeboat on the embarkation deck, lets go back to work.

After reading the interesting last post from José (here) I found myself remembering the lifeboat drills we used to carry out on board.
Since firefighting drills and abandonment drills are mandatory at least once a month we used to perform them at Saturdays (or Sundays, I don’t remember) while sailing (while alongside loading or discharging, all the crew was involved on the cargo operations).
Generally it consisted on a “fire” being set on a specific place (engine room, accommodation, pump room, etc.) and then, after ringing the alarm, the crew would gather at their particular muster stations according to the defined teams at the muster list, in order to begin the firefighting procedures.
Fire hoses and fire pumps were tested as well as fire detectors. Fire extinguishers were used and refilled afterwards. Breathing apparatus were used together with the fire protective clothing. Volunteers for this were always hard to get…
When the “fire” took place on deck the Cadets would most certainly end up soak and wet…
As the crew was never able to extinguish the fire, the abandonment order would be given and the crew would now muster close to their assigned lifeboat, with every crewmember responsible for a specific task that would bring the lifeboat to the embarkation deck.
Lifejackets were checked as well as the adequate protective clothing. There was a brief explanation on the liferaft launching procedures and its use on the sea, hypothermia and SAR procedures.
As the vessel was sailing full speed, lowering the lifeboat to the water was not an option. This was usually achieved when the vessel was at anchor or alongside a “friendly” terminal. In this case, instead of a complete drill, the lifeboat was tested with minimum safety crew, in order to not disrupt the cargo operations.
The engine and related controls were tested as well as all the other equipment (lights, compass, pumps, safety gear, etc.). Special attention was given to the watertightness, sprinklers and oxygen supply (being on a tanker there is always the risk of having to cross a sea in flames…).
Posted by Luis Daniel Vale at 21:12