The movie "O Assalto ao Santa Maria" is being shot at Viana do Castelo (among other locations) using the Portuguese Hospital Ship Gil Eannes as the main set. For this purpose several alterations were produced on the ship in order that a certain resemblance with the magnificent Portuguese Cruise Liner Santa Maria could be achieved, including the painting of the portside hull in that characteristic grayish olive green. 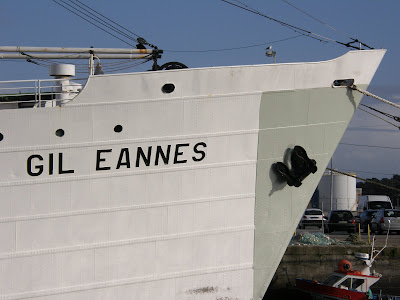 The movie plot is based on an historic event that took place on 1961. I took this note from wikipedia (sorry, by 1961 I was not born yet...):
"The Santa Maria hijacking occurred on January 23, 1961, when a group of Spanish and Portuguese leftists seized control of a luxury cruise liner called the Santa Maria.

The Santa Maria was a 609-foot long, 20,900-ton luxury cruise liner. This Portuguese liner was the second largest ship the nation's merchant navy had at the time. Owned by the Companhia Colonial of Lisbon, this ship was one of the largest, most luxurious Portuguese-flag liners of that time, along with her twin sister the Vera Cruz. The Santa Maria’s primary use was for colonial trade to Angola and Mozambique, Portugal's colonies in Africa, and migrant trade to Brazil. The ship's Mid-Atlantic service was also viewed as rather out of the ordinary: Lisbon to Madeira, to Tenerife, to La Guaira, to Curacao, to Havana (later San Juan), and lastly Port Everglades. The average trade for this gray-hulled ship was mostly migrants to Venezuela and the general passenger traffic.

On January 23, 1961, the ship had 600 passengers and 300 crew members. Among the passengers were men, women, children, and 24 Iberian leftists led by Henrique Galvao.

Henrique Galvao was a Portuguese military officer and political foe of Premier Antonio Oliveiro Salazar. Galvao had thought out and planned the hijacking. Galvao’s intentions were to wage war until Salazar was overthrown in Portugal and the subsequent liberation of her colonies. He planned on using the hijacking as a way to bring attention to the Estado Novo in Portugal and the related fascist regime in Spain.

The rebels boarded the ship in La Guaira in Venezuela and in Curacao, disguised as passengers, bringing aboard suitcases. The suitcases had secret compartments to hide their weapons.

The terrorists, along with Henrique Galvao, seized the ship, ceased all communication, and killed one officer and wounded several others in th process of taking complete command over the ship. The rebels forced crew members, along with the captain of the ship, Mario Simoes Maia, to take the ship on a different coarse.

The whereabouts of the ship remained unknown for several days. The boat had disappeared on the high seas until a massive sea and air search eventually tracked the liner down in the Mid-Atlantic heading towards Africa.

The journey of the hijacked Santa Maria was eventually cut short due to a troubled engine and problems with the 900 captives on the ship. After almost a fortnight the hijacked ship finally docked after evading the authorities for 11 days.

Galvao later announced that his intentions were to sail to Angola, to set up a renegade Portuguese Government in opposition to Salazar. Galvao’s stories of these accounts were translated into English and into a book as Santa Maria: my crusade for Portugal (New York, 1961)."

Now some pictures I took this afternoon: 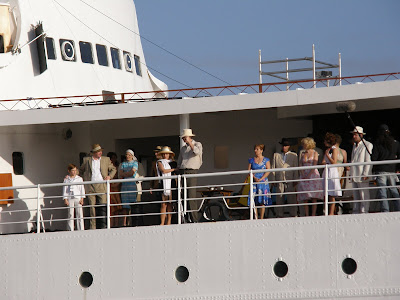 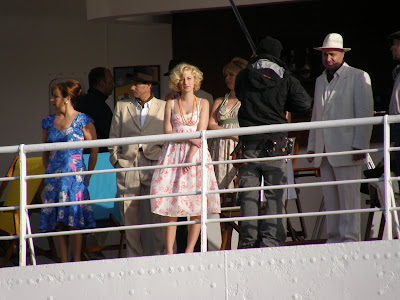 The boys here are telling me they already have a favorite character... 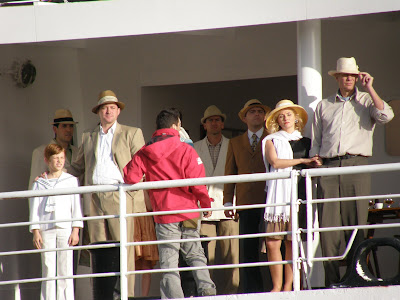 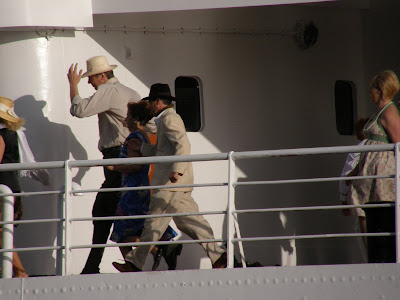 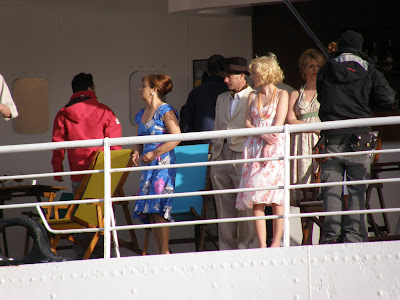 Sunny yet cold afternoon...
The movie is directed by Francisco Manso and the crew will stay in Viana until the end of April. The premiere will take place at Viana do Castelo.
Posted by Luis Daniel Vale at 20:10

Has this movie been made?
I was a passenger on the Santa Maria. I was 18 and boarded the ship with my parents and brother in Curacao. It was quite the adventure and I remember it clearly. I would love to see the movie or hear more about it.

I also remember this well. At the time I was in the US Navy, seventeen years old, and on one of the Navy vessels thatwas at Receife to insure the Santa Maria did not attempt to leave.

For Lena M Fajardo-van Tol and any other passangers, I am looking to contact you and interview you about your experience. I am working on a book about the incident.

Good day,
I am mrs. Kouwenaar-Persijn, I have been on this ship, with my son Thymen, at the time 1,5 years old. I was in the situation to give help with the negotiations between the "rebbles" and the Americans, whom came to save us passengers. I had a very good understanding with Mr. Galvao, a real gentleman. The food situation was terrible and the water supply only 2 hours a day. In the this situation and hot weather quit difficult. Behaviour of the passengers for so many days on one ship in the situation, you can imagine. Thank you.
Irène Kouwenaar-Persijn
ipersijn@planet.nl